A Rose Is Still A Rose

I am not saying anything new here, but it needs to be said, Social Media is a Pandora’s Box full of information and temptations that will lead you astray, and my warning stems from this …

Last year in a desperate attempt to save my dwindling rose garden, I actually tried one of those “tips” trending on Facebook. This is not something I routinely do, but I am definitely not above trying new things or being influenced by others, so with the same gusto I’ve always taken with peer pressure, I owned it! I was ready to take a simple rose clipping, stick it in a potato and propagate a beautiful abundant bush.

First, it was simple. All you had to do was take a cutting from an existing healthy rose-bush, remove the stems and stick it into a potato, then plant the potato in the ground with the hints of a new rose-bush above the soil. Easy!

Second, I had a dead rose-bush that needed to be replaced and I had a potato.

So, I got to work. I followed the instructions (stem + potato) and stuck that potato dead center. I was right, IT WAS EASY, now all I had to do was water it and wait. This is the easiest thing I’ve ever done! 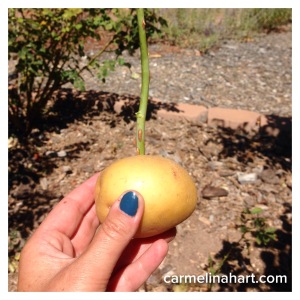 As the seasons changed, I waited … and … nothing. My dream of a beautiful bush withered and along with it all my expectations of what Facebook could do for me.

Fall, Winter and Spring passed to no avail. Then, Summer, life was rearing its ugly head, making itself known by fighting its way through the ground to the surface of the earth.

It worked! I could see a tiny bit of green, it was alive. Thank you Facebook! With a renewed feeling of worth, I watered, waited, and it grew.

Wait. Whaaaat?!? This must be the ugly duckling of roses, but unlike the beautiful swan that revealed itself at the end of the story, I had nothing but a spud.

Yup! I planted a potato and that’s exactly what I got.

Sometimes a rose is still a rose … until it’s a potato.