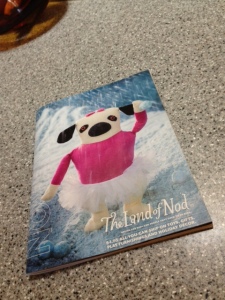 Azul is already in full Christmas mode! He has been creating his “want list” from catalogs we receive in the mail. While looking through The Land of Nod, he decided he wanted the Camper Play tent from us. I’m okay with that because I think it is super cool and have no problem getting him that for a present. And I have already measured out his room and am redesigning his bedroom layout so it will fit. Once he chose, I should have put the temptation away, but I left the catalog on the kitchen counter. Now his new “want” is the Rocket Shelf. It’s cool too! I was informed that, “You can get me the Rocket first and then the Camper.” I told him, “We can get you one or the other, but not both, so which one do you want?” Surprise, surprise, he replied, “I want both.” Standing my ground I say, “We will get you one of them as your Christmas present from us, which one do you want?” He looked at the catalog, turning the pages back and forth, obviously in a state of deep concentration. He then looked up and said, “I know, you can get me the Camper and you can tell one of your friends to get the Rocket for me!” That was not what I expected him to say and was near spitting out the water I was drinking…through my nose. He is quite the problem solver. Now, I’m the one with the problem.