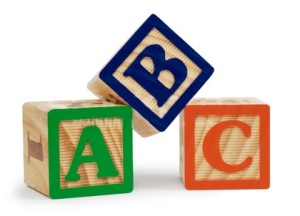 I like to spy on Azul all the time. I’m not sure why I like to watch him when he doesn’t know I’m there, but I do. The other day, while he was in the bathroom, I could hear him singing, so I went to investigate. I could hear the water running and some splashing. I stayed very quiet outside the door. Whew, he was washing his hands and singing his “ABCs.” It went like this, starting with the letters, “A, B, C, D, E, F, G…” He got through his letters with a couple of mix ups, but excellent overall, and I thought it was pretty cute! Next came, “Now I know my…” And now I was singing along with him in my head. We all know the song — it has been ingrained in us since, well, Pre-school. Azul continued, “Now I know my letters pretty good, next time won’t you sing with me.” Next time I will, now that I know his new version of an old classic.