Azul suffered from a head injury this weekend. 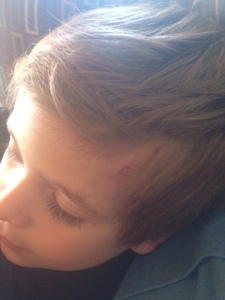 This was not his first head to floor duel, as an infant he rolled off the bed and landed on his head (this was my first official freak out as a parent), last year he fell off a chair at the kitchen counter and landed on his head (the sound of a head cracking on the tile floor was by far was the worst sound I have ever heard), but this was the first time I have had my wounded child delivered to my doorstep.

He was playing on the trampoline next door with his neighbor friend Nadia, like he has been doing on a weekly basis since she got the trampoline. I guess they were playing and the zipper door was not completely closed, so one jump too many and Azul flew through the opening like an arrow searching for its target. He landed head first on the decorative landscaping rocks.

When the doorbell rang only minutes after he had gone next door, I was immediately concerned and jumped up to answer the door. Of course it was chaos! Azul is crying and in our neighbor’s arms and her daughter is crying following along. As we do the pass off from one parent to the other, Nadia’s mom is explaining what happened and I look at his head and put him on the couch and grab a mother’s best friend, the ice pack. It was a big bump, but he was okay. An emotional Nadia and her mom headed back home. They did check on Azul later, he was recovering much better than Nadia who hadn’t stopped crying since the incident and now wanted the offending trampoline taken down.

While I was trying to make him comfortable, he yelled, “I just want some alone time!” He really didn’t like all the fussing over him and the extra attention we were giving him. All he wanted was the ice pack, some snacks and a movie. I was feeling a little concerned, but I was sure he didn’t suffer a concussion. Just then while feeling slightly more at ease and lying with him on the couch, in his weakened injured voice he said, “Can we just watch The Breakfast Club?”

Now, some may think that statement in itself is evidence of a serious head injury, but it made me feel better! He progressively felt better through the movie and at the end said, “Can we watch it again?” Maybe all his falls have knocked a few screws loose.