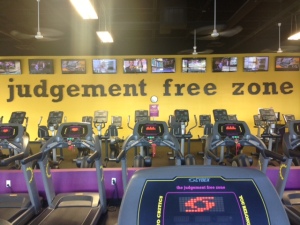 I do understand the whole “judgment free zone” thing, but really that’s not how I roll! So, the other day at the gym, I was on the treadmill which is near the back of the room with a good view of the other gym rats, all of us going nowhere on our elliptical machines, stationary bikes and treadmills. While running in place, yes sometimes I watch my contemporaries come and go and wonder what their deal is; why are they working out, what are they listening to, what do they do for a living which allows them to be at the gym at nine in the morning? Sometimes I make up scenarios for them, but I routinely do this to people no matter where I am. I’m just a people watcher and have an active imagination.

Well, this recent interaction, not with me, with two others I was watching left me confused. A couple of “guys” came in together, you know those guys at the gym who obviously need to be there, but act loud and obnoxious as if that behavior is going to distract you from the fact that they have disregarded their appearance since graduating high school. Well, those guys both got on elliptical machines, but skipped the one in between the two of them. Why?

Much of men’s behavior baffles me, but I think I might understand the “seat skipper” at a sporting event, but not at the gym. In stadiums the bucket seats are small and you are forced to be very close, so if there are enough seats available, just skip a seat. Right? Now, I am not a seat skipper, but I fit in a seat fairly comfortably and it doesn’t bother me to sit close to the person next to me either. Although I don’t do it, I can see why it is done.

Now back to the gym, these guys continue to talk to each other, but now they are breathing heavily and yelling in order to enable their voices to carry over the elliptical moat they’ve created. There is ample space between the machines and they are big enough to accommodate a large man, so why? Everyone knew they were there to work out together, they brought that attention upon themselves and then when they finished their 15 minute trek, they left together. So, they obviously weren’t afraid to be seen together and were friends.

Then shortly after they left, I watched two young women come in together and get on their sequential machines. They didn’t have to create a buffer zone between them and they were able to have a conversation we all didn’t have to hear. This made sense to me.

What’s the deal guys? I was so stricken by the “seat skipper” behavior, I forgot to make up a story for them. Still confused!