A Reason to Smile

Every milestone reached by my now six year-old has been exciting; talking, walking, potty training, reading, but I have not been this excited in anticipation for a rite of passage until now, and now it’s because of a loss, not a gain.

For months Azul watched his contemporaries achieve the look of a “toothless smile,” and all he wanted was the same, but it wasn’t happening, his teeth were hanging on for the long haul. It’s difficult to explain that everyone reaches different goals at different times and I’m sure even harder to understand this at six, when all you want is to lose your first tooth.

Then, just as I predicted, eventually it happened. One of his bottom front teeth was loose! We joked about the fact that this was the first tooth that grew in and now it would be the first one out. We talked about him accidentally swallowing it if it fell out while he slept or ate, or what would happen if it fell out at school. We also tried to help the process along by pushing and pulling on it, to no avail. The tooth turned into the bratty kid on the playground teasing and taunting us, swaying to and fro, but not budging.

I was feeling emotional about this, one small little tooth seemed to mean so much. It’s called an “adult tooth” for a reason, one day he will grow into adulthood to match his tooth! He is becoming a big boy, then a teenager and then a man. Ugh! Plus this is such an awkward look for kids, they have these huge teeth in little tiny mouths on little tiny faces, my precious baby will soon take on the appearance of the familiar Alfred E. Neuman.

All the messing with the tooth finally paid off and last night Azul realized it was super loose and ready to fall out. Not just ready, like it had been for weeks, but ready, READY! Azul and I were jumping around nervously, like marbles avoiding being eaten by a hungry hungry hippo. I was overly enthusiastic, giggling, getting a piece of floss to pull it out. He started eating an apple, wanting to bite his way into manhood. I was no help with my floss, I couldn’t even get it around his tiny tooth. From the apple he moved on to biting on his sleeve and pulling. The tooth was slowly giving in to its demise, but not without a fight.

That’s when Azul’s daddy reached in, grabbed our nemesis with his fingers and yanked it out! We heard a tiny crack, and it was all over. With everyone’s help, Azul was the victor, creating a small amount of blood, but a big amount of wonder. Azul dreamt about the pile of money he would wake up to and I thought of the man he would eventually become.

We prepared the tooth for the Tooth Fairy, although I had prepared for the Tooth Fairy months earlier. The going rate for teeth these days can be steep, anywhere from three to ten dollars, but I heard that some fairies give gold one dollar coins and I liked that idea. 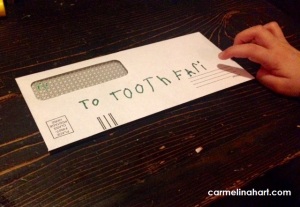 Once the tooth was placed safely in its envelope (making it easier for the Tooth Fairy), name on front, it was put under the pillow! Even with all the excitement, Azul slept.

In the morning I woke to a happy toothless grin and a six year-old’s narrative of the events leading up to the discovery of the gold coin. I have definitely gained a reason to smile. 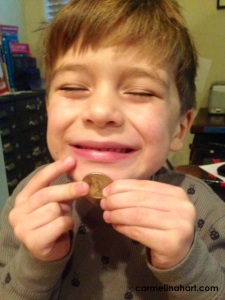