Hi, I am Azul’s mom, hope you’re doing well. I am not sure what the protocol is for such a letter, but thank you for taking the time to read it.

Since mastering the skill of writing, Azul has been very concerned with getting his letter to you just right. Although my seven year-old has been writing for a couple of years, this year he’s worked diligently and produced a number of rewrites. And with each new composition there are the addition and subtraction of wants and gifts, which I’m sure you are already aware of. He sees you when you’re sleeping, he knows when you’re awake …

He has been a good boy this year (quite frankly he was awesome), but I am concerned with some of the items on his list, they seem to be fairly extravagant this year, including things like industrial sized vending machines, drones and computers. 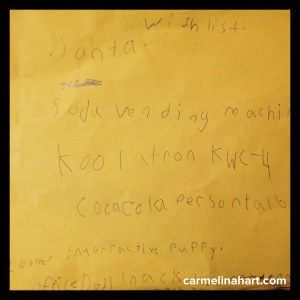 After much convincing (basically begging) on my part, he no longer wants a sandwich/soda vending machine for his room. Whew!

In his final letter, he settled on a new laptop computer. I reminded him that we already have two computers in the house and really don’t need one more.

Since my begging already met some success with him, I am now moving to the source to beg.

Pleeeease Santa, do not get him a computer for Christmas, laptop or otherwise!

Thank you and Merry Christmas.

P.S. Azul will have cookies and egg nog for you on Christmas Eve night, and carrots for your reindeer. Have a safe trip.