Head in the Clouds

It was a rare morning commute, when all three of us, Azul, my husband and I were traveling together. Usually we say our good-byes in the garage and go our separate ways, regrouping in the evening. Like most commutes, Azul and I were as chatty as ever, I’m sure ruining my husband’s normally quiet drive. It had lightly snowed overnight and was a mostly cloudy morning. While driving we had a perfect view of the Sandia mountains east of the city. 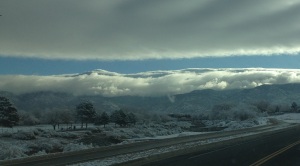 Azul continued, “If we were walking on the mountains we would be in the clouds.” Out of nowhere, we heard another voice in the truck join in the conversation. “We wouldn’t be able to see much,” Alan added. Azul, of course, was the first to respond, shaking his head with his hands in the air. “Are you kidding me,” he said. “We wouldn’t be able to see anything!” Then, we were all clouded by laughter!