You Be The Judge

Recently our mornings are a little more hectic than normal, we run out of time to get all of our morning ablutions completed, arguments and tears ensue, and it’s bordering on chaos. I suspect a couple of culprits need to be brought to trial for shortening our “breakfast time.”

Suspect number one, the weather. It’s colder outside, which I know doesn’t affect the indoor temperature, but for some reason cuddling in a warm bed seems so much more enticing when it’s cold outside. So, my six year-old cuddles with me when he gets up from his bed. And I love it. Nothing is sweeter than two little arms awkwardly wrapped around your head, forcing bed head into your face. As sweet as it is, it does cut into our breakfast time.

Suspect number two, a new addition to our family. Azul has a new friend to play with, we gave him a Kindle Fire Tablet. It’s his, and he knows it, and he likes to point out that it is “my tablet” every chance he gets. There are still rules on asking permission before downloading anything and he can only play it in the Living Room or Kitchen area, not in his room. But, like any other new toy, he insists on playing it all the time. Which also means during breakfast time, our already short breakfast time, he is playing and not eating, and then we have rush to get dressed. UGH!

Judging the situation, changes needed to be made, and as I struck my imaginary gavel in my head, I said, “Morning time is for two things, having breakfast and getting dressed, then if there is extra time you can play.” Oh, I’m a real hard ass! I might have even called him “my Love” during the issuing of the verdict.

Well, he didn’t take his sentencing lightly and stormed off to self-imposed solitary confinement in his room. Soon, he returned with an appeal. 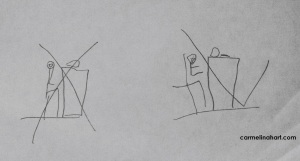 This is a picture of Azul at the counter eating breakfast without and with the tablet. The one without the tablet is x-ed out, the second one with him playing on the tablet and eating is checked.

“I have a complaint!” was his vocal companion to the formal written declaration. Although the court recognized the objection (with a proud grin and a mommy giggle), it was nevertheless denied. The evidence against the cuddling was also thrown out.