“Diversity is a part of life; we’re all different, no one is exactly the same.” 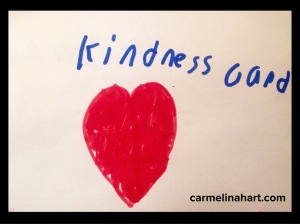 There has been so much negativity floating around lately, it makes it hard not to be discouraged, but as a parent you can’t give up. Our (yes, OUR) children depend on us, they look to us for cues on behavior, they watch our actions and then learn from them. In this fog of pessimism, this is the perfect time to show some positivity, and with Thanksgiving and the Holidays right around the corner, offering thanks and gratitude can actually be fun for kids. It is also a much needed learning experience for adults caught up in the act of constant criticism.

This has been one of my favorite projects, it not only makes kids feel good, but it makes others feel good too. How can you go wrong with that!?!  It has many different names, Gratitude Card, Pay-it-forward Card, and others, but we call it a Kindness Card. No matter what you call it, the idea is basically the same. You unsolicitedly and anonymously do something nice for someone and then leave the card. 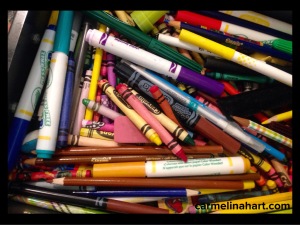 First, have your child make the cards they will be handing out. The cards can be on index cards, blank note cards or even a piece of paper cut into sixths. After preparing the cards, get the crayons and markers out and let their imagination go wild. Coloring and decorating is always a fun activity for kids and they get to learn and write out the words, “kindness” and “card.” Bonus vocabulary and spelling lesson!

Next, talk with your child about things they can do for someone else. It doesn’t have to be a present or anything that requires money, it can just be a thoughtful action.

Then, let them come up with a list of people they want to receive their Kindness Cards.

And last, follow through and give out the cards. You may want to make and distribute some Kindness Cards too.

My seven year-old, Azul, got to work on his right away. I could see his thought process from the expression on his face, intense but also content. He was determined to complete this project, and the anticipation of doing something nice for someone else seemed to make him happy as well. While he was working, I was told to, “look away,” immediately revealing that in my future I would receive a Kindness Card.

A few days later when he gave his creation of thankfulness to me, he took on the role of Fin Mc Missile from Cars; in a crouching position, he snuck around the kitchen counter, I saw a small hand come up, like the scope of a submarine coming out of the ocean water, the delivery of the card took place and then he immediately retreated to the living room. Although he was in stealth mode, I watched the entire process in my own undetected stealth behavior. I could actually hear the Mission Impossible theme playing in my head.

I of course announced my discovery, “Hey I just found a Kindness Card!” Azul glanced up from his seemingly innocent activity with a look of satisfaction and replied, “It’s from me!” I thanked him, told him I loved it, and gave him a big hug. His act of kindness in turn inspired my act of gratitude and we were both happy. 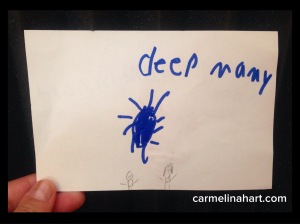 Sometimes kids have a hard time understanding anonymity, after all they do like getting recognized for their good behavior, we’ve taught them that, and that’s okay. If they want to give Grandma and Grandpa the card and say it’s from them, so be it. The lesson they take away from giving kindness is greater than that of keeping it to themselves! 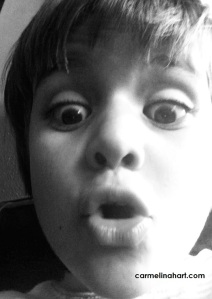 Now as a mother, I am enamored with the ability children have to learn. They are able to take separate concepts and join them together to create some kind of understanding by relating one thing to another. And once this collection of knowledge is formed by association, the possibilities to comprehend seem endless.

This morning Azul inquisitively asked, “Why do we have this thing between our two eyeballs and over our nose?” while touching his face.

“You know what that’s called between your two eyeballs, don’t you?” Sometimes I answer his questions with a question, I want him to be able to make the connection himself.

“What?” A typical six year-old response, he still wanted my answer.

“The bridge, it’s the bridge of your nose,” I finally replied.

“Oh,” he paused, “Then I bet the eyes are called lakes!” he excitedly stated, using his knowledge to make it come together.

“That is very logical,” I said, sounding kind of Spock-like, and then, “It makes sense to me!” sounding much more mom-like. The conversation continued as to why we have a nasal bridge, and together we laughed at each other and with each other, bridging the gap between each other.