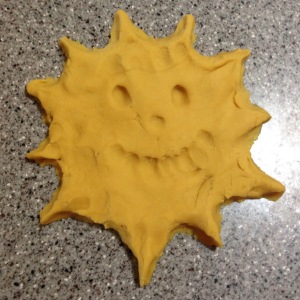 We’re already deep into pool days and water balloons, but we only officially just got into summer. What does that mean? Summer Solstice marks the fist day of summer. It’s the longest day of the year. These projects will guarantee fun from the start of the Summer Solstice to the end of the season!

Kids love playing with play dough, and making it is just as much fun as playing with it, so make some Sunshine Play Dough. There is a secret ingredient you must use, to make the dough last longer, cream of tartar.

Directions:
Stir together all ingredients, except the flour, until smooth.
Add the flour and knead dough.
Store in an air tight container or plastic bag.

These fun to eat sun shaped snacks will be a huge hit with your kids. The pineapple and strawberry combination tastes delicious and the skewers mimic a popsicle, so it’s easy to eat. If you are looking for a cooler treat, just stick them in the freezer for a couple of hours, voila fresh fruit popsicle.

Directions:
Remove the outer skin of the pineapple and core.
Slice the pineapple to create rings.
Cut the tops off the strawberries.
Place a strawberry in the center of a pineapple ring.
Gently slide a skewer through the fruit.

Clock in an all day project with this home-made instrument which marks the time by the shadow it creates. After making the sundial, place it in a place that will get full sun all day. Let your kids mark the shadows throughout the day, every hour or two. As a parent, it is awesome to see their amazement when they realize they made a clock.

Directions:
Secure the floor flange in the center of the base with screws.
Screw the pipe in the connector.
Place in a sunny spot that will get full sun all day.
Mark the shadow your sundial creates with chalk throughout the day.

Watch On The Rocks on 2 KASA Style

I never set out to be a stay-at-home mom, it just kind of happened. Most of my son’s life I have worked. I worked while I was pregnant, I worked through his infancy, and I was working on his first day of Pre-school (way back in 2011). Things are now different and I am not reporting to a job in the traditional sense. This summer Azul, my five year-old, was my job, and like many of my other jobs, I took it very seriously.

Azul was on Summer Break from school and now a stay-at-home kid, and I was not working and therefore a stay-at-home mom. Our circumstances and titles brought us together, but the last thing we were going to do was stay at home!

This is when “Mommy Mania” began. I set out from the beginning to do as much as possible and expose him to as many learning experiences as I could. The learning was actually the easy part because at this age any experience is a learning one, the doing was harder. We tried to get out of the house at least five times a week, some weeks were better than others, and then there were the lazy, all day in our pajamas days too. But overall we got dressed, ready and were out and about!

The first day of Summer Break, the first thing we did, first thing in the morning was play putt-putt. We were the first ones there, just before 10 a.m. when they opened. We golfed two games of 18 holes, had pizza and soda, because Azul was starving at 10:30 in the morning and ready for lunch, and acted as if we hadn’t eaten breakfast just two hours earlier. This was the first time Azul had putt-putted, a nice way to kick off Mommy Mania.

There were some activities we really took advantage of and did a lot, like play dates, going out to lunch, feeding the ducks at various duck ponds around town, catching the first matinée showings at the movie theater, lots of baseball games at the Albuquerque Isotopes Stadium, eating gallons of ice cream, and Azul’s favorite, pool time.

We attended weekly activities at the Albuquerque Bernalillo County Library where Azul’s Daddy works. And discovered he now wants to be a Librarian just like his Daddy.

He participated in gymnastics classes, swimming classes, and one of the coolest Summer Programs around. He was involved in a production of the Sound of Music performed solely by children in grades k-8.

We were lucky enough to be able to go out-of-town a few times this summer. Azul and I visited my Aunt Jeannette’s pecan farm in southern New Mexico, where we lived the farm life for a couple of days and went to a Rodeo in El Paso one night. Our family camped at Cochiti Lake in New Mexico and spent a week at Waikiki Beach in Hawaii. Azul was surprised how quick our red-eye flight was coming back compared to the trip over, saying, “They didn’t even have the movie or serve us any drinks it was so fast!” Of course, although he adamantly denies it, he slept for the entire flight home.

Azul did earn some money this summer at a yard sale we held with our neighbors. He picked some old toys he didn’t play with anymore, set them out in the morning and worked the sale when people came by to peer at our goods. He was quite the salesman and able to keep all the money he made.

Because of the warm and sometimes really hot weather in Albuquerque it is easy to enjoy the outdoors by walking and biking the Bosque Trail. At other times we visited the Albuquerque Botanic Garden, Albuquerque Aquarium and Tingley Aquatic Park. While at Tingley we rented a pedal boat and were able to pedal around while followed by a flock of ducks! And we loved seeing all the baby animals at the Rio Grande Zoo. 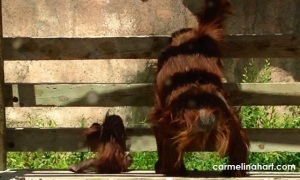 When it was too hot, we spent hours at The Natural History Museum and Explora Science Center, the hands-on children’s museum. My favorite indoor activity was going roller skating! I don’t think I had been skating in over twenty years and I know that was Azul’s first skating experience. Every time we knocked each other down, off our skates, it took us a while to get up because we were laughing so hard. One day, courtesy of PBS, we even met The Cat In The Hat.

Then there was our trip to Cliff’s Amusement Park, where after riding every ride his height allowed, we rode the roller coaster eight more times — IN A ROW! We also went to an indoor playground called Monkey Mania. I preferred it when we took a friend with us, then I didn’t have to slouch through the spongy maze made for little people who actually wanted to do this.

One of the last things on the list was to visit a Fire Station. I got ahold of an old friend from high school (so, yes, old) who was a firefighter and he set up a tour for Azul. He got to sit in the truck, pull the horn, turn on the lights and even got to talk on the PA system at the station. All he kept saying was, “cool,” over and over. When we left, I asked him if he wanted to be a Fireman when he grew up and he replied, “No I still want to be a Librarian and work at the Library.”

I will never be able to repeat this summer, but it was fun while it lasted, and although it is still August, sunny and 90 degrees outside, with our last trip to get mani-pedis together, my summer solstice has set. Mommy Mania has come to an end and my constant companion is now going to All-day Kindergarten. Whew, I’m tired!

The weeks leading up the start of school were bittersweet for me. Tears rolled down my cheeks more than once while I reflected on how fortunate I was to spend so much time with Azul and looked to the future where there is less time for us to be together. In his beautiful attempt to comfort me he said, “You might get lucky and when I get sick you will have some bonus days with me!”

My little friend will soon be six years old, in his new school, with his summer experiences under his belt and new titles to claim, he is moving on. And I am returning to my old title of stay-at-home mom and get to look forward to sick days?! Ugh…