Yes, the debate has already begun, should Christmas be celebrated before Thanksgiving, or does the turkey deserve its due? If you are a defender of the cornucopia, I’m here to tell you, that argument is so 2016. Move over mashed potatoes, it’s time for the jack-o-lantern to scare away those jolly elves who want their lighted tree to shine in … October?

I am all for celebrating any and all holidays, and if you have a party, I’m there. But, Thanksgiving lovers caught in a tryptophan daze just lost the fight with Christmas, and the sleigh bells have moved on to a new target to conquer, Halloween.

I’m sure the Boo Day purists will find it offensive walking into a Home Depot right now, only to find their inflatable Grim Reapers replaced by red-nosed reindeers. Don’t let what happened to the turkey happen to the ghost, instead of battling with old St. Nick for your day, take over a holiday you can dwarf. Maybe, Labor Day or any one of the 30+ holidays in August can be your focus. I might want to stay away from Independence Day, that one might blow-up in your face.

And on this day of ghost and ghouls, Merry Christmas!

I Pick You To Be My Valentine

Valentine’s Day is one of our favorite holidays because we (okay, mostly me) love to make cards for Azul’s class. The ritual of actually making cards, came from his pre-school teacher when he was three. Her instructions were to make the cards and the entire family had to take part. Store-bought cards were allowed. So, not wanting to get in trouble with the pre-school teacher (you know how snotty they can be), we did as we were told and five years later, we still are.

This year’s project took some convincing and a little begging, things were thrown around like, “It’s the second grade, it’s not that gross, it’s funny, it’s just a play on words, come on, laugh, there’s candy” and then finally, “you won’t get an infraction, but if you do, I’ll tell the teacher it was my idea.” I used everything I had and succeeded, my eight year-old finally broke and we made the cards I wanted …

I pick you to be my Valentine, is this year’s theme.

Card sock and Printer (If you print them yourself,  like we did.)

Really, it’s not much!

Step 1) We took a few pictures with different expressions, while he held his hand next to his shoulder and his index finger pointing up. And he picked the one he wanted to use.

Step 2) I used a picture app to write the saying on the picture to complete the card.

Step 3) We printed the cards at about 5” x 6” two to each sheet of paper and cut them to size. You can also have them printed fairly inexpensively at places like Costco.

Step 4) He wrote the names of each of his friends in class, on the back of the cards. 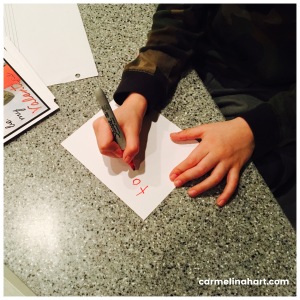 Step 5) Then he glued each small bag of gummy boogers to the tip of his finger on the card. I promise, it was glue!

Step 6) We let them dry overnight.

Azul, not wanting to get in trouble for being a little snot, decided to pick one for the teacher too. Good call!

Something is fishy this year for Valentine’s Day, and your kids and the “school” are going to love it! And really, so will you because it is super easy and cute.

Step 1 – Print out the fishbowl cards on colored paper using the template below. Yup, super easy!

Step 2 – Have your child cut out each fishbowl. It doesn’t need to be perfectly cut out, after all they are just kids.

Step 3 – Now your child can write “To and From” on them. We wrote the names on the back. It was just easier that way.

Step 4 – Insert the cards into the treat bags and have your child fill them with a handful of Goldfish. Their little hands are the perfect size for a kids-sized snack!

Step 5 – Secure the bags with a twist tie. You are done.

I love the simplicity of these cards and who doesn’t love a good fish story.